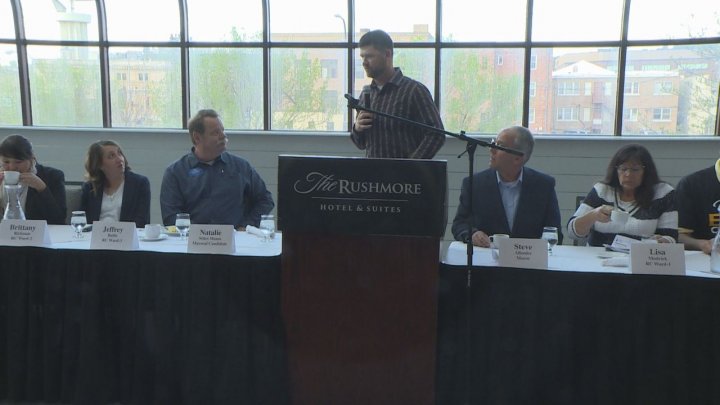 RAPID CITY, S.D. (KOTA TV) - In less than three weeks voters will head to the polls to choose their city leaders. On Thursday, several candidates held conversations over a cup of coffee at the Rushmore Hotel in Rapid City.

Candidates give their pitches at the Black Hills Home Builders Association candidate breakfast.

Among those in attendance were the two candidates vying for the Rapid City ward two seat.

Former Rapid City Area Schools employee Bill Evans says he is dissatisfied with his district's representative and is running on a platform of reinvigorating the appearance of the city.

He is facing army/navy veteran Ramona Herrington, who is focusing on affordable housing and Native American representation in city government.

"The cost of housing is very high," Herrington said. "When income is falling and the prices are rising - that's a very big issue for me that I would like to tackle."

"What is going to make us stand out?" Evans asked. "Part of it is just putting on a clean shirt and a tie and putting a good foot forward when people come to visit. I think we can do that with some city-scaping and making sure our roads make a good impression."

Click on the videos to hear their full responses.

Early voting begins on Monday and the election is June 4.

Rounds announces bid for second stint in US Senate

The Latest: Buttigieg, Sanders ahead in early Iowa results

Rounds announces bid for second stint in US Senate

The Latest: Buttigieg, Sanders ahead in early Iowa results